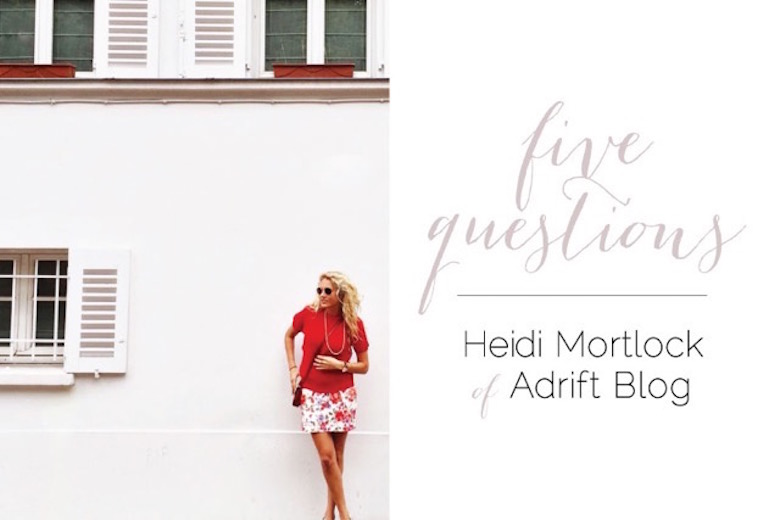 I first met Heidi of Adrift when she was a guest of a friends and a last minute addition to a little girl gang gathering I was having. I immediately knew that she was meant to be there and like everyone else in the room I was endeared by her charm. She speaks with a lightness and curiosity all while dazzling me with her worldly experiences (i.e. Cate Blanchett moment below). She is a writer and journalist and recently launched a blog featuring interviews with inspirational women all over the globe, together with a collection of travel stories and reviews. Her writing style is one that will captivate you without being intimidating. I just love how through her time living on three continents Heidi, a Sydney native, attracts women from all over the world and if she collects anything, she may collect fans!

1. What was your best career moment or your first big break?
I majored in Performance Studies at school, and to this day remain a huge enthusiast of theater and the world of performing arts. My first job out of university was working in the PR/Marketing department for Giorgio Armani in Sydney, and during my first six months it just so happened that we became the main backer of a leading Australian arts organization, the Sydney Theatre Company. To celebrate the patronage, Giorgio Armani himself flew out from Milan – with his entourage of about 20 folks – and we held a glitzy sit-down dinner with actor Cate Blanchett (who was the Co Artistic Director of the theatre company) and a cluster of other brilliant actors, writers, directors and affiliates of the art-world. It was my first ever “pinch-me” career moment.

2. What is one thing about your current life that would surprise the younger version of you?

Oh wow, just one!? I’m pretty sure if my younger-self had been forewarned that this is what life in the future looked like she would have spat out her vegemite toast in bewilderment…

When I was younger I never really gave much thought to my future or how I wanted it to look. I daydreamed of becoming a singer (for the record my singing these days is offensive, even in the shower) and if anything else I just liked the idea of a cookie-cutter life in Sydney: homeowner at 25, married at 27, two kids by 30. This couldn’t be further from the reality! I don’t own a house (as a matter of fact, I no longer own any assets at all…aside from a colossal assembly of books and travel magazines), I’m not married and I’m certainly not spoon-feeding a toddler with a second on the way. I never would have imagined I’d spend four-and-a-half years living around the world, writing about my travels and interviewing some of the most incredible women I’ve met along the way – which is exactly why I named by website ‘adrift’, because often floating through uncharted and unforeseen waters turns out to be the most fulfilling way.

3. What do you collect, and what do you think it says about you?

See above reference to my only valuable possessions – books and travel magazines. I can’t ever throw away a good book or magazine. I’ve shipped my mounting collection from London, to San Francisco, to Amsterdam, to Sydney and even then, I still load my check-in luggage at the airport with books. If the bags are too heavy, the clothes always go first; I’ve filled airport bins with toiletries, jogging shoes, coats and dresses, but never the books or magazines. As for what it says about me…maybe I’m a chronic literary hoarder?

I also have quirky habit of collecting the business cards of every restaurant I’ve ever visited.

4. Whether big or small, what was the last trip you took?

I’ve traveled quite a bit this year, but my last big trip was a few months ago to South Africa. We booked our flights 10 days before and hardly booked anything else in advance. I very rarely travel like this (research control freak) but it ended up being a godsend, as I had no expectations. I was absolutely blown away by how much I loved Cape Town, Stellenbosch, going on safari and visiting a bunch of amazing and tastefully decorated hotels and restaurants in this beautiful part of the world. I couldn’t recommend a trip to this region highly enough!

5. What is your happiest / most vivid memory involving a certain floral?

I am a fervent bloom lover, so having fresh flowers permanently in my home guarantees happiness on a weekly basis. Waking up on a Saturday morning, grabbing a coffee, walking to my neighborhood florist and putting together an arrangement has over the years become one of my favorite pastimes.

As far as standout memories, I think the happiest are the ones that remind me of home. Each time I visit Sydney my mother greets me with a beautiful big ‘welcome home’ bunch of my favorite flowers: white hydrangeas, peonies or David Austin roses. It always adds an even lovelier touch to coming home. I also love walking up my parent’s garden path at the home where I grew up and catching my first whiff of the gardenias starting to bloom…an eternal telltale that summer is on its way.